To Show You What I Mean

I've said it so many times recently, I might as well just post a screenshot to show what I mean.


I recently supported @KrisAttfieldGAMES on LBRY.


The following screenshot is the portal reporting activity on the channel: 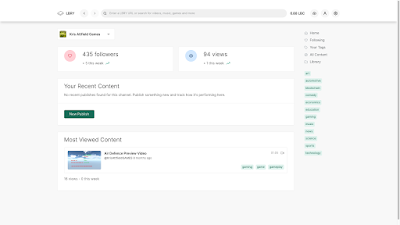 I had +5 new Followers in just a short period of time.

I have 435 Followers, only 94 total views, and my best-viewed item is a free video with only 16 views.

The numbers just look so weird.

Either people are following me without actually viewing anything, maybe they just don't have the credits,

or maybe the government just takes everything I earn.


I know, it might not be realistic that the government garnishes my LBRY earnings ---- but how else can I explain it?

How else can I explain every other publisher I tried?

Either people don't have money, or some entity like the government is taking it.

And I wouldn't be surprised if the government was doing it too ---- it's possible that when I got signed up for disability they might have had me sign some kind of form saying they get to have my royalties. I'm not 100% certain about this, but I have some vague idea in my mind this might be the case.

Now you know why I say what I say.

The numbers in my reports are so unrealistic that my brain is trying to figure out some kind of explanation.

And it's been like this for a very long time --- eg hundreds of likes on Facebook without any sales.


I asked about the problem with a similar screenshot on LBRY itself.

I may have been wrong about the suspicion of the government taking my value.

It's supposedly possible that "dodgy" individuals are following random channels without actually watching anything in order to try to claim rewards.

I guess that explains it.


As of now, I think LBRY's servers are having some problems or something because two items I tried to view weren't coming up (and these were small files) and I didn't get my daily reward for watching content either.

Hopefully, I wasn't personally kicked off the rewards program, it might just be a server issue or because of a change in the value of LBRY Credits ---

but yeah --- it's just weird when almost all the credits you earn are from views you freely give away, and people won't pay 20 or 30 cents for anything. I dunno, maybe I shouldn't complain --- I remember what it's like to be poor, and I know it's very very difficult. Just forgive I guess. If anything, I learned something.
Posted by Kristian Attfield at 10:54 AM