My Response to the Church

So:: I filled out the survey the correlation research department of the church sent me.

At the end of the survey, they asked if I would be interested in taking, essentially, a paid position on a more regular basis somehow helping the church.

That might seem so cool that they're still interested in me::: but I know my Dad pretty much has a mental breakdown whenever I talk about religion or Mormonism so a lot for his sake I declined.

And yes --- the Patriarch did tell me I'd witness and perform miracles ---- and yes, the miracles are very much very real.

But upon living longer experience and doing more research ---- wow ---- there are so many problems. Is the church really a good thing?

There are definitely good things about the church --- that is true ----

But in some ways, the storytelling or the doctrine can seem pretty incoherent and confusing. I've had mental disability problems I'm sure over these issues.

SOOO::::: Just a little while before the next General Conference, where there should be two new apostles ---- the church did contact me and basically asked me if I wanted an essentially paid position.

The church was remarkable in many ways ----- but I grew very tired of it. There are so many problems. And yes --- I should serve God ---- but, some Mormon doctrines are pretty questionable in the eyes of many ----- so yeah, I didn't feel like manning-up and taking the plunge. I know a lot more now than I did when I was 14 or 17.

As for something newer in my life that seems kind of out of place::: I mentioned this on my blog before, but now I've taken a picture of the receipt, and I have a screenshot from my banking portal to show that something went weird. 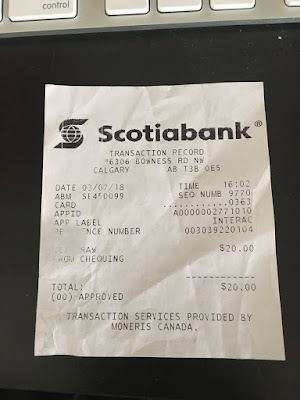 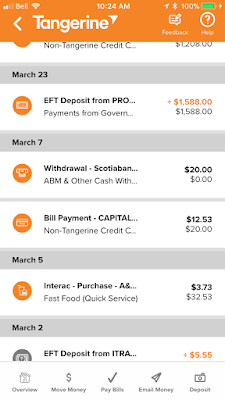 So::: in the picture on the left, we see that the balance of my bank account after withdrawal is listed as "20.00".  But in my banking portal we see that after the withdrawal, I had nothing left.

This is probably the biggest evidence for something happening recently.

The other evidence were two receipts that printed similar-to-each-other really big numbers.

I was concerned that I didn't want to take another person's receipt because I didn't quite know what I was looking at ----- but then it happened two times, and the numbers were big enough and similar enough.

The sad thing is, I don't even totally know where the money came from at this point if it is money for me:::: is it the games? is it the books? is it the lottery? is it that Japanese person who wanted to buy me? is it the church even, trying to help me take a job with them?

I'll lastly point out that on the receipt, there's the 20 written beside the "withdraw from chequing" --- that is the amount I took from the bank machine during this transaction.

The 20 beside the "total" is supposed to be the amount left in my account. Of course, the numbers don't match --- so obviously something happened.
Posted by Kristian Attfield at 10:14 PM