In all or most of my tests with my parents trying to read their minds --- I have often been wrong. Maybe they just won't let me be right.

But, I can play with my computational devices as well, so have a look at some of the cool results I got the past two days:

I started playing ESP Trainer on my iPhone yesterday. I was doing pretty OK at that at first.

Then I went to Telepathy 0 on my iPhone. I got a 6 streak. 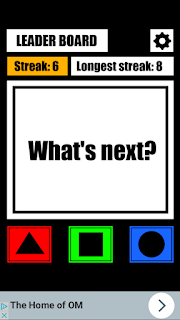 Then today I decided to try a game I developed myself on the Mac --- Guess 3 Characters. I did pretty well at that this morning too.

Years ago my psychiatrist was making a big fuss out of my belief in telepathy, condemning me to years of drugging and ridiculed for my beliefs.


Years later, with the help of computer technology, home family testing, and the US government's admission that they were doing the Psychic Spy thing decades earlier ----- I have now proven my point about the whole telepathy thing, TELEPATHY IS REAL.

I'm not necessarily the best at it, but I can demonstrate it pretty OK.


So, now I'm pretty much just laughing my ass off, that the doctor was so forceful in trying to take away my beliefs, which is actually essentially illegal ---- especially when my beliefs become scientifically provable.


And then there's how after I tell my new doctor about how I was right all along --- the nurse then says they were actually drugging me for a different reason. They never told me exactly what that reason was ---- but the reason they said they drugged me apparently wasn't the actual reason for the drugging. So that's kind of confusing.  They made me argue about a point, and that point didn't even happen to be their logical reason --- they were essentially dishonest at that point.

Just moments ago I made a screen recording of myself playing my Guess 3 Characters game and posted it to Youtube.

I guarantee you I was only using mental inspiration to get the results.
Posted by Kristian Attfield at 9:23 AM

Email ThisBlogThis!Share to TwitterShare to FacebookShare to Pinterest
Labels: telepathy