I just did something I haven't done for a long time:

I went to author central at amazon, and looked at my historical author rank.

Considering how much people don't buy anything or much of anything from me ---- I sure do have some interesting lines being drawn.


If people consistently never buy from me --- you'd think I'd constantly be going down in rank and really shouldn't get up in rank so much,

but I've noticed that I do have some ways of going up in rank, even dramatically up in the past -----


Would one book sale send me from bottom to top so quickly?

What about all these little patterns where I'm going up a little bit at a time?


If I never sold anything --- you'd think I'd be heading down consistently. But I'm not.


Something very strange here. Does just visiting my own Author page or looking up my books on the website improve my rank?

Anyway, with such lack of sales, you'd think my rank would be in constant decline ---- but it's not in a completely constant decline. Something else is going on, even if it's a small number. Hmmm.

And then there are these from bottom to top to bottom again movements --- would selling one book at a time do that to me?

Maybe I just don't know how to interpret the graph, maybe I don't know all the factors involved.


I just didn't think my author rank would improve at all if I had no sales or anything.


But for some reason, my author ranks improves quite a bit in OCTOBER of 2016 ---- yet there are NO reports of any action going on then.  Was it just a correction? Did Amazon suddenly lose a lot of authors?


Most of the big swings on the chart I can account for ---- apparently one ebook sold does dramatically increase your author rank ---- and I've accounted for most of it,

Just a correction? What?


And then, for the past 2weeks to a month, my author rank has slowly been going up --- that probably means nothing, but it doesn't make a lot of sense. Very weird.

But a big increase in October 2016 that isn't explained by any sales reported. Huh. Confusing.

I asked Amazon Author Central about the substantial Author Rank Improvement in October 2016 that has no explanation, and I was wondering what the explanation was-------


and the response had nothing to do with Author Rank, it was some bs about the Bestseller Rank that I already knew,

so at this point AMAZON has just given me the first step in a run-around.


I asked a question about Author Rank, and they responded with stuff I already know about the Bestseller Rank which is not the same thing.

So yeah ----- I asked Amazon about this, and only got a run-around response. 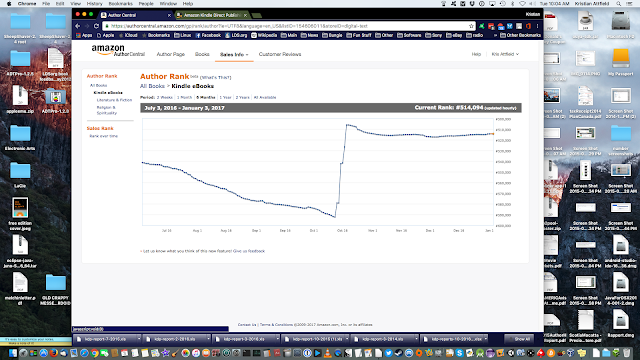 Posted by Kristian Attfield at 9:29 AM

Email ThisBlogThis!Share to TwitterShare to FacebookShare to Pinterest
Labels: book