When should I stop? 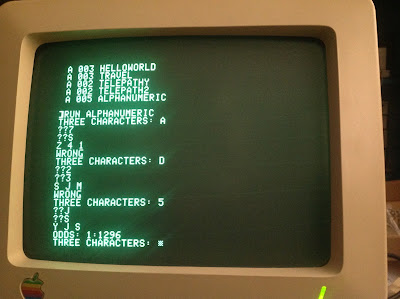 So, this screenshot was taken 3 hours ago, I had just turned on my apple II with my disk inserted, I ran a catalog to see the programs I had put on my disk, I started my Alphanumeric Pick 3 game, and then on my 3rd try in the game, while the catalog was still on the screen, I got 2/3 in the right order, achieving 1:1296 odds.

In the video I took of this screen, I think I suspected or wondered if the RAM in my Apple II was functioning properly.

Basically, recently I've been doing really-way-too-very-good at these telepathy games. You do kind of have to wonder if the computational devices are functioning correctly.

What are the chances that I'm being haunted or there's some poltergeist about? I think there might actually be a chance of that actually ----- earlier this week I watched a youtube video, which I favourited, of poltergeist activity on security cameras. The next day, for no reason at all my light fixture on the roof of my bedroom fell down and the lens on the light fixture smashed into the floor and broke. It immediately seemed like it could have been a poltergeist.

I had another experience doing these computer tests which is really strange and interesting to me, but I felt very compelled to not take photographs, and even now as I write I feel compelled to not tell you what I experienced. It's like mind-control at this point making me keep a secret about some strange phenomena I noticed.

I'll just say that either the Apple II random number generator isn't really very random at all, or there is some kind of memory problem or a ghost manipulating the memory. Those are my possible suspicions. And yes --- I still feel compelled not to tell any details.

But yeah --- after barely having started to test this morning, I beat extremely steep odds --- again. So. yeah. Photographic evidence and all.
Posted by Kristian Attfield at 2:44 PM