So, yesterday I started work on an alphanumeric pick 3 game for my apple II.

This morning I managed to fix the bug where "K" was almost always the answer.

And after fixing that bug, having found my program to function as I would expect or hope it to - I went through several rounds with it.

What did I find?

I found that hearing a thought-voice telling you the answer works a lot better than just guessing.

Thought-voices aren't always true or accurate, to be honest, sometimes they are downright misleading ---- but in today's testing I found that there's this thought-voice in my head that's decently good at giving me the right answer, the right result. 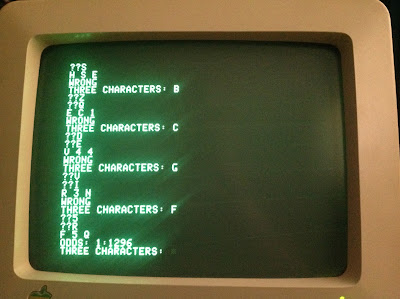 This is a photograph of my Apple II's monitor, after a thought voice told me the right answer twice in a row, allowing me to beat statistics at a 1:1296 level.

I had only done less than maybe 10-20 tests after getting my program to work, and I immediately found that a voice in my head could tell me the right answer twice so I could get 2/3 in the right order in one Pick 3.

So, after getting dressed and going for a walk, as my mom showered I sat on my couch playing Telepathy 0. I asked GOD to get that voice to come back to me, so I could score a 10-streak on the Telepathy 0 iPhone game.

Well, the voice did come back ----- but it only took me as far as a 6 Streak.  That was very pleasant, very nice, and it's just very interesting to see that a voice in your head can and will give you correct answers.

So, maybe some day the voice will talk to me truthfully enough, correctly enough, accurately enough, to get me to a 10-streak. I can only hope.

So yeah, there. Happy. That voice is actually real and it exists, and it tells me the right answers on occasion.

I don't think I'm at an Amazing Kreskin level yet though. He's still better than me.

I'm not going to post any photos or screenshots about what I'm about to say because my photos are spread across different devices, and the computer I'm using is still uploading my photo and video library to the cloud so it's not taking downloads, and well, at this moment I don't have everything in one spot so I just won't post any pictorial evidence here for what I'm about to say but, here we go:::

So, I was working in my sister's back yard for a while, then I came back to my place, and sat down at the Apple II for some Alphanumeric Pick 3 testing.


And then, I sat down on the sofa, and did some Telepathy 0 again.

After a bunch of completely forgettable testing, I got a 5 streak. I failed on the the last go, so I only got 5. But then, less than 2 minutes later, I got another 5 streak.

I took a screen shot of the first 5 streak, and didn't screenshot the 2nd, which was less than 2 minutes later.

If only I didn't make any mistakes in between and had gotten a 10 streak. Yikes. Ouch. OMG. I tried. That 10 streak would be awesome, almost made it, two 5 streaks in quick succession. Yikes.

And then I put down my iPhone just so I could update this blog post. :)
Posted by Kristian Attfield at 12:59 PM

Email ThisBlogThis!Share to TwitterShare to FacebookShare to Pinterest
Labels: telepathy