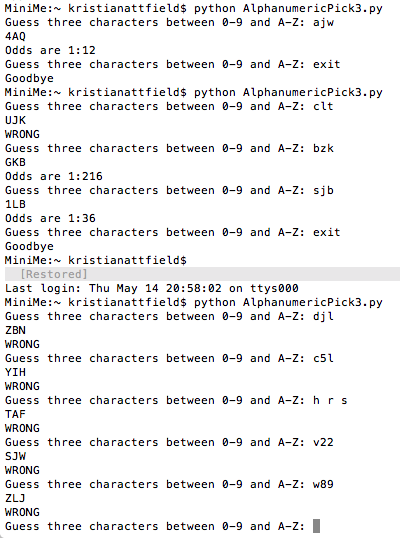 So I grew concerned that running my alphanumeric Pick 3 game on my Apple II wasn't producing truly or even close to producing randomly generated text sequences::: so I wrote a script that does much of the same stuff, but better, on my Mac Mini in PYTHON.

Between the opening of the program and the "exit" commands I've entered, I never changed the script and was running the same program each time.

The first guess "ajw" and the winning "4AQ" was my first run of the script after having finished developing the script.

So, basically, what we see here is me getting good guesses, even 1:216 odds, within the first 4 tries.

Then a bunch of subsequent tries after that all completely failed, except for a couple eventual tests that I did that don't appear in this screen shot.

Well, guessing that well is happy, I guess. Dunno. Makes me happy, to beat really low odds. Over and over again.

It's kind of crazy.

But yeah, this post is just to say that I wrote a new script on a newer computer, the results should be closer to random, and I've already started showing some good ability in the first few tests.
Posted by Kristian Attfield at 9:23 PM