So, though my telepathy doesn't always works --- when it does work, it is amazing.

So: I was at my OUYA, playing Telepathy 0, and then I had to leave the house.

Eventually, as I was sitting in my bedroom, I realized I could write my own telepathy game, a game that I could trust more than the unknown code of telepathy zero.

I've always been of the opinion in the past few years that Apple 2's are absolutely awesome. I was correct. Came in very useful/handy to write a short script and then test my telepathy skills with. 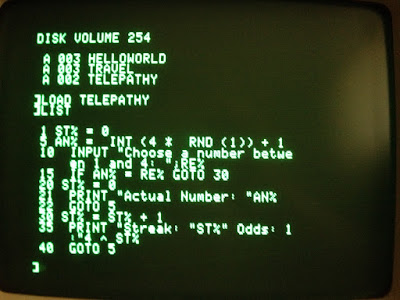 Here is a photo of the script I wrote.

I wrote the script in the usual way you would write a script on an old Apple IIc and saved it to a 5" floppy.

The script tests your ability to choose from between 4 numbers, 1-4. 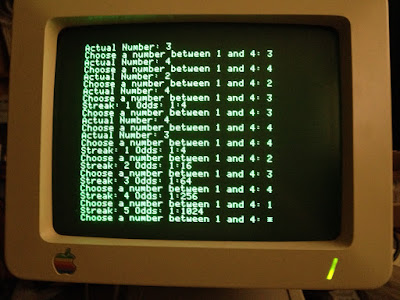 So::: why did I stop my fun and share with you this photo?
To show you that my telepathy really came out for a little while when I was testing.

Yes. I feel really quite proud of myself now, I guess you could say. I've defeated my own program.

When I took this photo, I took video of myself saying, while recording the screen, I said that I suspected the next number would be a 3 or a 4.

I entered "3", and the result came back as "Actual Number: 4". I guess I can do pretty decently then, I got it wrong finally, but one of my 2 choices was the correct answer on the last one. Happy.

And I just have to say ----- it's for things like this, for doing things of a useful nature, that I really love the Apple II. I mean, compared to having just pen, paper, slide rule, having an Apple II is absolutely awesome. I kind of wish they were still in production.

The one thing I'm sad about the apple 2 is that it only works with 16-bit calculations - generally, though if you multiply two big numbers, the numbers can get pretty big, but it only seems to accepts the input of 16-bit numbers, which kind of limits the device.

If you want a more modern, hand-held apple 2-like device, then I know the TI-83plus is pretty good for that. TI-83plus IS cool, BUT I like the apple 2 for having a full-sized keyboard. :)

So yeah, did some "telepathy" today.  And yes, I do call it telepathy, because it was more than just basic guessing, I was following my "instinct". Hah. :)
Posted by Kristian Attfield at 6:39 PM